The Polish part of the Upper Silesian Coal Basin (USCB) in the area of interest for the PostMinQuake project we can divide for area with still working mines and areas with closed mines (see Fig. 5). The north- eastern part of the USCB is the area of already closed mines. The last of them – Kazimierz Juliusz – was closed in 2016. Earlier, due to the safety reasons the water table was lowered to the approximate depth 700 m. Currently, the process of flooding the mine is in progress.

The Kazimierz-Juliusz mine at the time when coal mining was conducted had high, induced seismicity (until  2015). Last year (2018) in this area a few seismic events with magnitude higher than ML=2 were recorded (Fig. 5). In the southern and western part of the USCB there is the problem of the impact of strong seismic events induced in neighbouring mines on post mining closed mines – reactivation of tectonic faults or shallow voids. 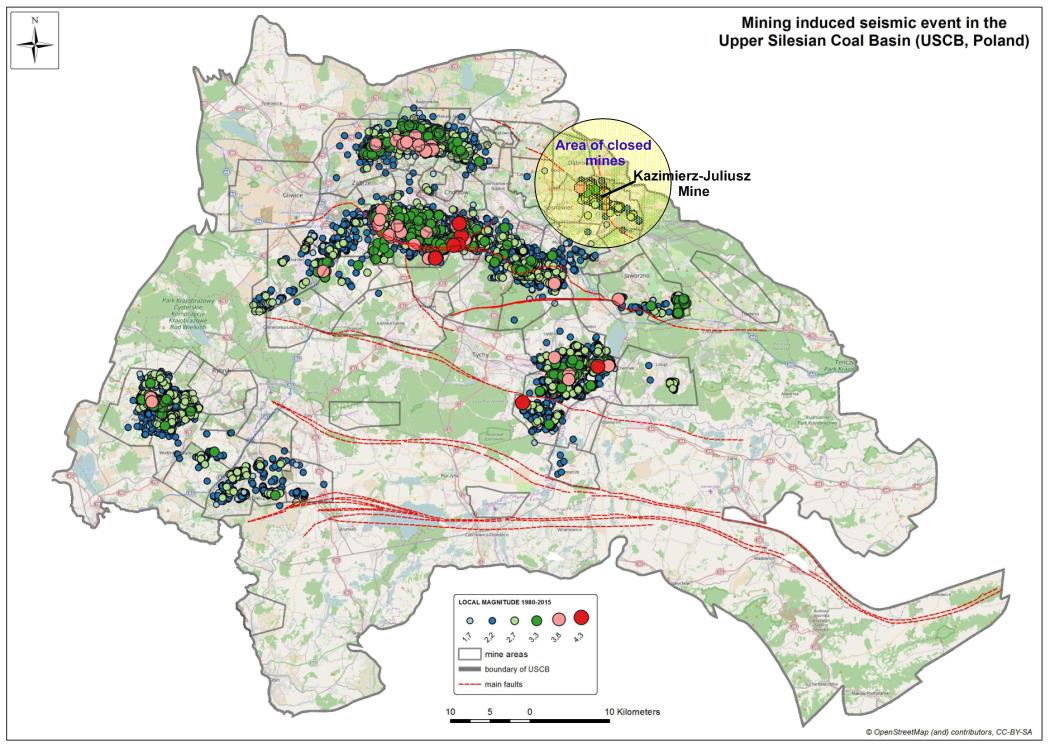 Seismological monitoring was introduced in Polish part of the USCB in 1970’s due to rockburst hazard  in mines. Seismically observed is almost whole the USCB area except of the southern part near the border with the Czech Republic and the area of closed Morcinek mine. The Upper Silesian Seismic Network is conducted by GIG and recently is developed in national EPOS-PL project. The system consists of 15 triaxial GeoSIG seismometers (T = 5 sek), 4 accelerometers located in boreholes (at a depth of 30 m) and  5 accelerometers on the surface. Under EPOS-PL project the seismic network will be extended of 5 more stations, to measure translational and rotational ground motions. In the Polish part of USCB we have deployed two continuous gravity measuring systems (tidal gravimeters-type gPhoneX), a few deformation continuous measuring systems (GNSS stations) and 3 water level, continuous measuring systems (Fig. 6).f reasons can be different natural conditions between sub-basins as well as lower detection capability of seismological monitoring system outside of Karvina sub-basin. Detailed analysis in the frame of the project is necessary. Seismic activity registered during flooding of Morcinek mine is depicted in the Fig. 4.