Part of the Czech Upper Silesian Coal Basin (USCB) in the area of interest for the PostMInQuake project can be divided according to natural conditions on three main sub-basins: (i) Ostrava sub-basin, (II) Petrvald sub-basin and (iii) Karvina sub-basin (see Fig. 1). Seismological monitoring was created in area of Karvina sub-basin due to high rockburst risk in 1980s as a part of rockburst prevention system. Detection ability of this monitoring system overlaps area of Karvina sub-basin. Seismological monitoring is composed by two seismic networks which data are evaluated together, (i) regional seismic network and (i) local seismic network on every colliery of Karvina sub-basin (see Fig 1). Regional seismic network consists of ten triaxial short-period WDS seismometers (f = 2.0 Hz), six of them are located in boreholes (at a depth of 30 m), three were installed underground in active mines and one was situated in a short gallery at the Ostrava-Krasne Pole seismic station. The frequency range (f) of the network ranged from 2 to 32 Hz and the dynamics of the recorded seismic signals were around 120 dB, with a sampling frequency of 125 Hz. Local seismic networks in every active colliery are equipped with uni-axial, low-frequency and low-periodical vertical SM-3 seismometers. The basic parameters of these seismometers are as follows: input sensitivity 16 µmV to 5 mV, maximum amplification 74 dB, frequency range 1.5 to 20.0 Hz and sampling frequency 100 Hz. 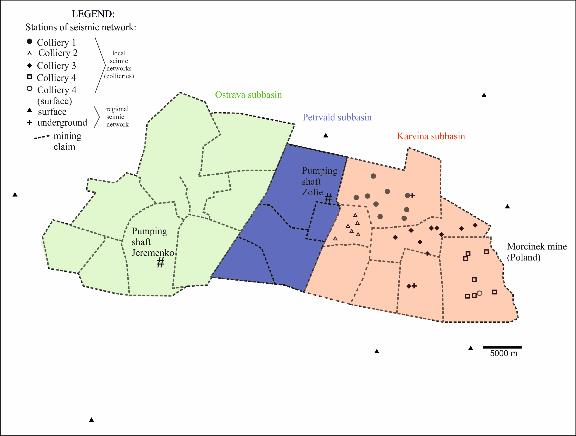 Mining has a long history in this region which reaches more than 200 years. Mining finished in Ostrava sub-basin in 1994. Flooding of Ostrava sub-basin started in 1994. From 2001 is preserving water level on altitude -388.5 m below sea level (dept. app. 600 m below surface) due to water pumping in Jeremenko pumping shaft (see. Fig.1) and on altitude -483 m below sea level (depth asp. 680, m below surface) in Zofie pumping shaft (see. Fig.1). Main reason is to prevent of water over flooding into the Karvina sub-basin due to connection of all sub-basins due to tectonic structures as well as underground opennings.

Near the above-mentioned area was flooded Morcinek mine in Poland (Eastward from boundary of Karvina sub-basin, see Fig. 1) in period from 1999 to 2013. Partners from the Czech Republic do not have detail data of flooding as well as detail data of mining in Morcinek mine.

Due to flooding of Ostrava, resp. Petrvald sub-basin was registered low seismic activity (see Fig. 2 and 3). One of reasons can be different natural conditions between sub-basins as well as lower detection capability of seismological monitoring system outside of Karvina sub-basin. Detailed analysis in the frame of the project is necessary. Seismic activity registered during flooding of Morcinek mine is depicted in the Fig. 4.