In France, coal mining activity in Provence basin has left many underground voids at different depths that causes land subsidence or collapses in areas of high population density. The coal basin of Provence is located about 20 km NNE of Marseille (Bouches-du-Rhône) and covers ~60 km² (Figure 8). The industrial exploitation lasts from the first half of the 19th century to 2003. With more than 500 km of tunnels and levels exploited up to 1 350 m deep, the Gardanne mine is the first mining area in SE France. During the exploitation, the miners had to pump the underground water. After 2003 the aquifer had recovered rapidly until 2010 when new pumps were installed to stabilize the level of underground water between – 30 m NGF and + 10 m NGF (at ~ 300 m depth). In order to prevent a potential hazard of rupture of pillars (may generate small earthquakes), accompanied by surface effects (subsidence), Ineris is operating a microseismic monitoring permanent network of 5 stations. 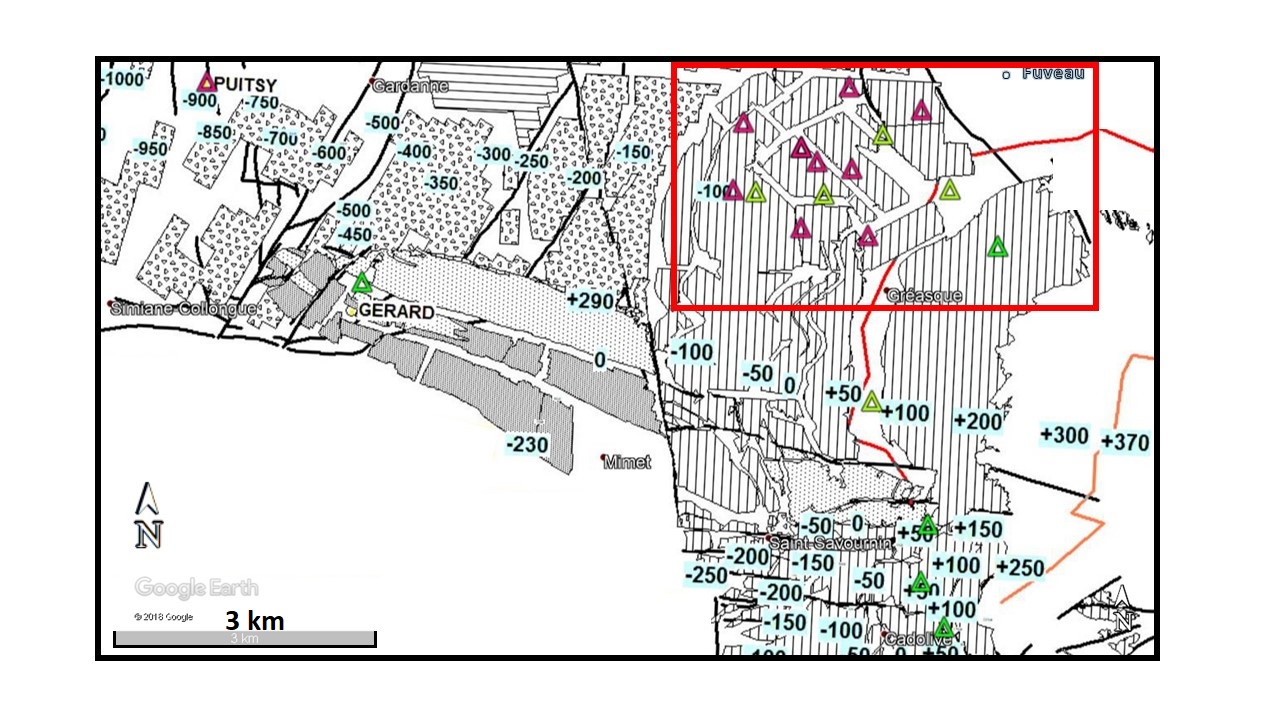 After a seismic crisis strongly felt at the end of 2012, outside of the areas monitored by the permanent network, 5 new seismic monitoring stations were deployed in private houses by BRGM. As of 2018, the network has been densified (now 9 BRGM and 4 Ineris stations over around 3 km², shown in Figure 9). The microseismicity analysis on the December 2014 crisis suggests an activation of an adjacent, deeper fault system (Dominique, 2016, Kinscher et al., 2018). From Sept. 2016 to April 2017, the activity increased sharply, prompting many reactions from the population of Fuveau and Gréasque areas. The activity has since decreased but persists with a dozen of seismic events per month (M-1 to 1,5 ; depths < 1 km) and 5-10 events felt each year.

The Provence Coal mine was one of seismic mine in Europe during years. After closing the mine in 2004, part of these underground voids are now flooded and have caused seismicity (fig.7), the strongest events felt were of a local magnitude greater than 2.2 (Matrullo et al., 2015; Kinscher et al. 2017, 2018). To mitigate risks associated to potential brutal collapse, real-time permanent microseismic monitoring has been implemented in sensitive surface areas. The aim of this seismic monitoring is to define the types of events generated by mine flooding: induced seismicity, triggered events with fault re-activation, or natural events. Depending on the response, the estimate of the likely maximum magnitude in the mining area may differ significantly and can have impact on the seismic risk management.

The Provence coalmine site observations showed that there is a complex interaction between the mining system, the water circulation and the local tectonic context, that can lead to enhanced seismicity. Since these seismic events occur in areas with a strong human and industrial implantation due to history, the question of attribution and assessment of these ground motion becomes a central point for mine operators wishing to begin the abandon process.

Faults are not always identified by previous geological studies, and the stress state is usually very badly constrained. However, mining operations are often very well documented and can provide a vast amount of geological information that can be exploited to refine the geological model available – provided that the methodology is improved in order to incorporate this information.

The Gardanne site should therefore provide a sufficient quantity of dataset recording seismic events during the project.